The bear photo I captured the other day from out my front door generated some local media attention. I was interviewed by KHSL TV Action News Now reporter Charlene Cheng.

I enjoyed chatting with Charlene as she worked. The life of a modern multimedia reporter is complex. You must master video and audio production along with journalism.
White balance, sound check, b-roll, good questions. And in the rain.
Impressive. Not at all just a talking head. 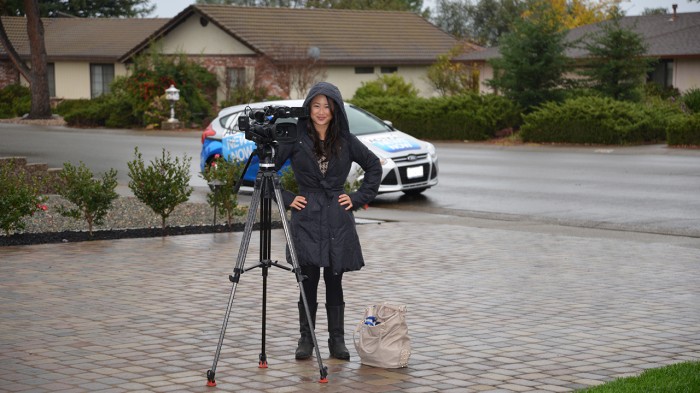 “Bear stories are always interesting,” she tells me.
You can follow Charlene on Twitter @charlenecheng and catch her work at http://www.actionnewsnow.com/home/

I was also interviewed by reporter Clay Duda of the Record Searchlight, and my photo made the front page, below the fold. 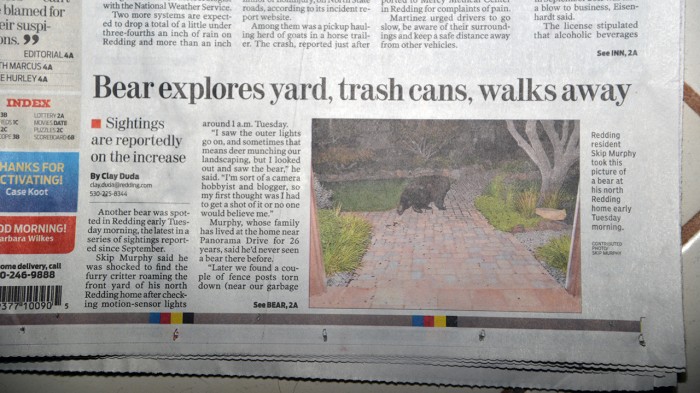 You can follow Clay on Twitter @clayduda_RS. It’s often fascinating to see Clay report the news via Twitter as it is happening. The tweets are somewhat cryptic, and then you can read the fleshed-out story later at redding.com. Or in the newspaper, as above. 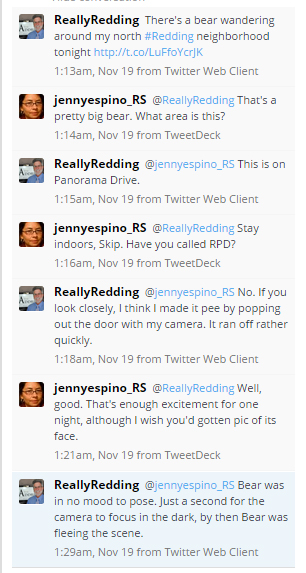 An interesting (to me) Twitter side note.
I was pretty excited at 1:00 am when I snapped the bear photo.

To my surprise, almost immediately I got a response from @jennyespino_RS, also a reporter for the Record Searchlight/redding.com.

This exchange of tweets took place almost immediately following the bear sighting, at an unexpected time of day.

Such is the nature of Twitter and our present culture’s near instantaneous news cycle.

Reporters sensed the bear story would be interesting to their audience.

It’s easy to see why that is true. Bear Spirit is well established in our species.

“In the kingdom of spirit animals, the bear is emblematic of grounding forces and strength. This animal has been worshiped throughout time as a powerful totem, inspiring those who need it the courage to stand up against adversity. As a spirit animal in touch with the earth and the cycles of nature, it is a powerful guide to support physical and emotional healing.”

“If you kill a bear, you better have something good to make out of it! This stew is delicious! Serve with a crusty bread!”

The duality of bear. Both Spirit and Entree. That’s Really Redding.

previous post Local winery having a big Thanksgiving Sale!
next post WOODSIDEgrill in Anderson at the Gaia
Back to top
mobile desktop