Genes Drive In in Redding

A Facebook post reminded me of this image I captured of the old and semi-famous Gene’s Drive In. A classic Highway 99 burger joint that in its day often attracted crowds of hot rod enthusiasts. Seen here with a “classic” dented Geo Metro parked out front, more indicative of the hard times seen a few years back. Gene’s did not survive the economic downturn. 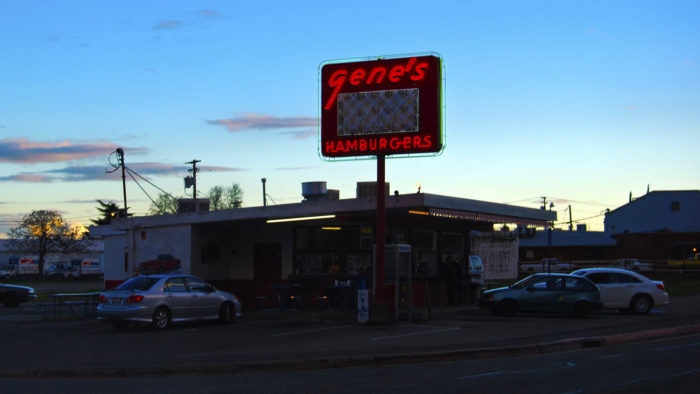 I think it was mostly the big neon sign that made it seem special. In the end, not enough to save it, like many other neon lit Redding landmarks.

A few years back, Redding adopted a “50s Glitz” proclamation. That was to be our design theme for downtown. It hasn’t been widely adopted, luckily. What few new structures that tried it ended up looking ridiculous and forced. Not real neon, but neon-like colors and plastic signage. I hope the idea fades out. Neon elevated Gene’s to a certain charm, but obviously not enough to sustain it. Neo-Redding should look elsewhere for a design theme.

This entry was posted in Architecture, Historical, Opinion. Bookmark the permalink.