Facebook friend Lee Riggs posts to a group Northern California History. I always find his posts fascinating. He recently posted this image of the Redding Theater marquee on California Street in Redding, from the famous Eastman collection. 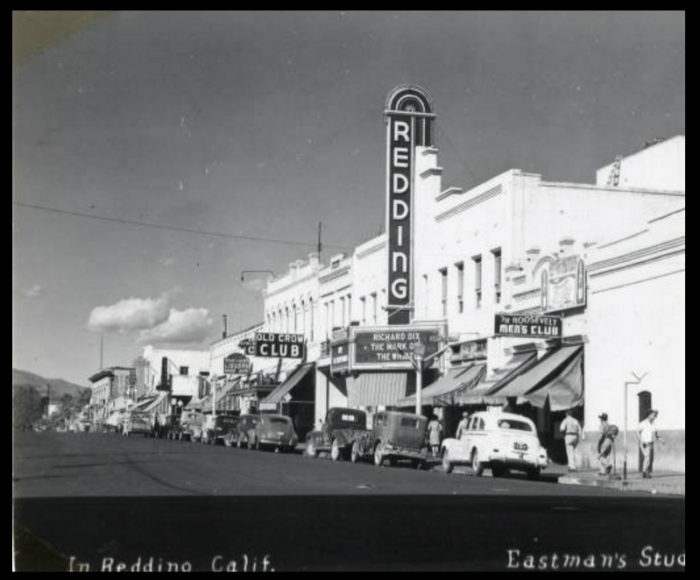 I did some Photoshop cleaning, and enlarged it a bit. I like how it turned out. Click to expand. 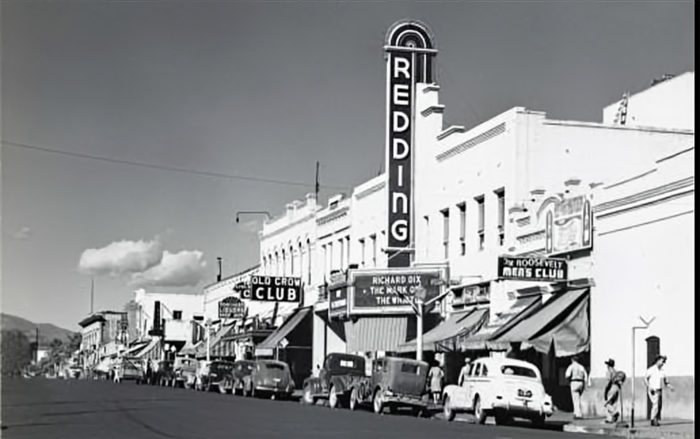 This story of life in Redding years ago appeared in the comments section of the Facebook post. Curating it here, since it adds detail that helps paint the picture of daily life here years ago.

“JOE Cabitto was washing dishes in Jaegel’s Cafe when the two prospectors came in lugging a gunny sack holding a gleaming 370 ounce gold nugget. The miners had found the nugget in Motion Creek, which joins the Sacramento River just below Shasta Dam. At the time, Shasta Dam was still 30 years in the future, Cabitto was a strapping young fellow and Redding had about 4,000 residents who swatted mosquitoes and shivered with malaria, even in the blistering summer heat. Jaegel’s, where Cabitto washed dishes and waited table, was a no frills cafe offering hearty roast beef dinners for 35 cents. Jaegel’s location eventually would be swallowed up by The Mall in downtown Redding, and Oser’s women’s wear store would replace the cafe. Nobody even dreamed of a mall.

Cabitto was “pearl diving,” or washing dishes, in Jaegel’s Cafe. Across Market Street, in those days, was Bags McConnell’s pool hall, where a Western Union “boy” stood on a stool and read a blow by blow telegraph version after each round in the 1927 Dempsey Tunney fight. Cabitto won $800 on that fight, the outcome of which still stirs bitter arguments because of the “long count” the referee gave Tunney after Dempsey knocked him down.

Jaegels was the favorite restaurant not only for the men who worked in town, but also for the farmers and miners who came to town on business. It was on the west side of Market Street just north of the Yuba Street intersection. All the cooking was done behind the counter on a wood stove. I had to go out into the alley in the back to cool off. There were a couple of big ceiling fans but all they did was keep the flies off the counter. The meals were served at the counter except for a couple of tables at the back where the few women who came in were served. It was my job to serve them. We called the tables the “Blue Room” and I really hated waiting on those women, especially when they were drinking. Dinners were thirty five cents and were served from 11:30 AM to 3:00 PM. That thirty five cent dinner included what they had cooked that particular day—roast beef, roast pork, beef stew, or on Thursday we had corned beef and cabbage, plus three pieces of bread with butter, potatoes, coffee or milk. After 3:00 PM the meals were served short order, mostly steak. A rib steak cost forty cents, a T bone sixty five cents. They were thick too. Fridays we had fish—halibut and sanddabs from Seattle, or fresh eastern oysters which came in cans packed in ice. Jaegel’s was the only place in town that served 10 cent coffee. All the other restaurants sold it for a nickel. The reason was we had to get rid of the morning coffee drinkers so there’d be room to start serving dinners at 11:00 to the regular customers. Some of the other people who worked there were: Ed Gibson and August Jacobi, the bartenders, Bob Gibson and Barnett, the cooks, Bill Rester, the waiter. George Lapp was the owner. His mother had been a Jaegel. The pay was $85.00 a month and board for seven days a week, eleven hours a day and no vacation. So we figured the more we ate the more we got paid. I went from a modest ] 65 pounds to 240 pounds. During the Depression we had to take a cut in pay, down to $65.00 a month, but they didn’t cut the prices for the meals.”

Again, this is from Lee Riggs. Thanks for sharing.

This entry was posted in Historical, History and tagged Historical. Bookmark the permalink.