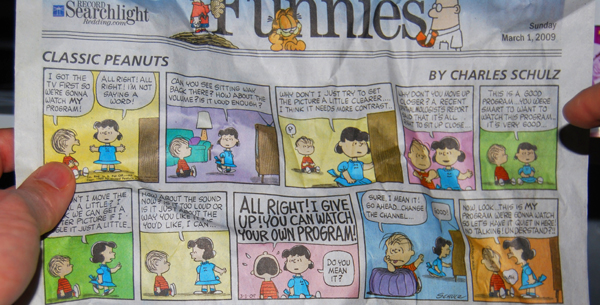 Check it out! I’m not making this up. I was lining my birdcage when I noticed this on the top of the March 1 2009 RS Comics section. It triggered a faint memory from 9 years ago, that this comic artist had died! Seriously, he’s deader than the Rocky Mountain News. I confirmed it here in Wikipedia. I wonder who they’ve been paying for these recycled strips, and how much? Somebody should tell them. If only they could stand actually reading the strip, those intrepid news-hounds would have surely been tipped off. Look, those kids are watching television instead of surfing the web, and when the little girl wants to adjust the picture on the old tube TV, she gets up and does it at the front panel. Who does that? You’d think a newspaper would have heard that he was dead. Wow, they’re being totally scammed.

This entry was posted in Fun and tagged Record Searchlight. Bookmark the permalink.